Usually, these kinds of posts will be a quick introduction followed by the content I’m sharing. This post won’t quite be usual, because when I start rambling about NaNoWriMo, I tend to go on longer than intended. As brevity has never graced the top 100 of my strong suits, I tend to replace the phrase “long story short” with “long story Calley-length,” meaning that the story will still be far longer than necessary, but I’m at least trying to keep things brief.

NaNoWriMo is an abbreviation for National Novel Writing Month, a writing challenge that started in 1999 between a guy and his friends and now attracts hundreds of thousands of participants worldwide. The goal is to write 50,000 words toward a novel during the month of November. To answer the commonly-asked questions I get about that, it’s equivalent to:

There are regional events, email pep talks from famous authors, word sprints, a cult-like vocabulary (including gems such as the Traveling Shovel of Death), and a lot of fun involved. I’ll spare the details, but it’s truly a phenomenon of a month. This will be my eighth year of participation, and I’ve managed to drag myself across the finish line each year . . . even the one where I applied to graduate school during November. That stats graph bears showing. 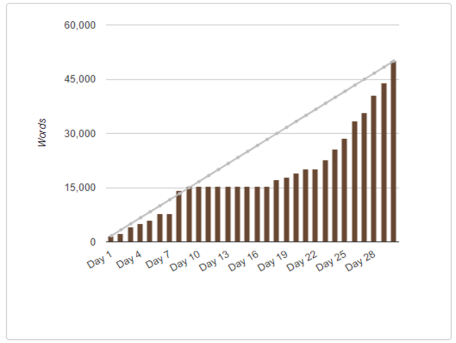 Anyway, I love NaNo (an abbreviation of an abbreviation) because it made me write again in a season of my life when I was about to give it up. It has introduced me to some of my best friends and buddies who keep me accountable, and it brings me back to the keyboard for a crazy month every year, regardless of where I am or what else I’m doing, to put writing first.

That being said, I’ve spent six of my eight NaNo experiences working on a novel series that’s still in progress (which you’ll hear more about in future posts). Last year, I discovered a fun penchant for horror and chased that. This year, I’m trying to cram out a lot of content on a superhero serial I want to web publish soon. The serial is called Casters’ Court, it’s been rolling around in my head for a few years now, and I’m excited to start sharing it!

Today’s content is my blurb and “excerpt” posted on the NaNo site, as a teaser for things to come. With any luck, you’ll be seeing more about Casters’ Court in future posts.

For the ‘casters’ who possess such powers, the status quo is not so easy to abide by.

Enter the Casters’ Court, a volunteer vigilante organization of ragtag casters who strive to uphold the moral values of the caster community . . . when they can agree on them. Clothed not in masks, tights, and capes, but in T-shirts, sweats, and sneakers, they fight for “good” and against “evil,” arbitrary as the categories may be. But beneath the superhero facade, each member has their own convoluted history and their own secrets.

Designed as a serial with no determined ending, Casters’ Court will hopefully span several intertwined “story arcs” and eventually begin publication on Radish, Wattpad, or my personal blog.

I reach out to the handle of the door. As my skin touches the metal, I realize, with a startled jump, that I reached for it with my left hand. The concept is so jolting that I don’t proceed with the spell, but instead just stand there, staring at my fingers against the curved metal. Then, quite suddenly, I start to laugh.

The laugh develops quickly into a sort of cackle– a comfortable, familiar cackle from the shadows of a former life. I let my hand slip from the handle, but the cackle doesn’t subside for another several moments. “Not tonight,” I manage to choke out at the end of it. I turn away from the balcony door and head back through the living room toward the bedroom door. That was all I needed to snap me out of it, I guess. The urge is completely gone now. Not tonight.

Maybe some other night.

I’m excited about the story and the month to come! I look forward to posting more snapshots and sharing how to access the whole story once it becomes available. Anyone else doing NaNo this year?