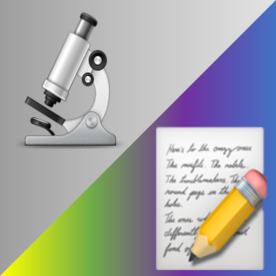 This post is about what I want to be when I grow up.*

*Disclaimer: Over the past year, that ultimate goal has changed by the week, if not by the day or even hour. It has bounced back and forth. The pros and cons lists have circled around and around in my head until they ran themselves ragged. I’ve stared at the wall more than once with the ultimate thought, “well, that’s it. I’m not sure I can make it in anything I want to do with science, and a career in creative writing, for me, is laughable. I have no future.”

Those were the dark times, and hopefully, I’m past a lot of that now.

The truth is that I’ve spent the majority of my life knowing not just what the next step is, but exactly what needs to be done to get there– and not just get there, but be as remarkably qualified as possible, in every imaginable way. The thought of being halfway through graduate school without having a rock-solid idea of what I would do after graduation, much less a plan of how to get there, was unbelievably stressful. I only received acceptance letters to half of the graduate schools I applied to after molding my entire collegiate life around being the perfect applicant for my desired program. How in the world would I be expected to get a job?

The punchlines of this life dilemma that I found, once I put on my big-girl pants and realized that my problems were the baseline norm for the vast majority of young professionals, were as follows:

I wasn’t hopeless, so all I had to do to feel better about all of this and start putting the pieces together was simply choose.

It came down to teaching vs. science writing (and by the title of this post, you can tell which one I went with). At the end of the day, I really just wanted to tell people how important science is– not just to college students in a lecture hall, but to everyone. Explain how things happen on the daily level. Build trust in scientists. Clear up some misconceptions. It’s a tall order, of course, but I could be content doing my part.

Creative writing has made me a natural storyteller– this would just be different stories. Real stories. Stories that could maybe have a different kind of higher meaning to people.

I’m posting this now because I’m beginning some science communication activities at work that will hopefully push me closer to this goal. I’ll keep you posted on my progress. In the meantime, if  anyone has questions about science or science communication/outreach for a REAL(TM) scientist, feel free to ask!